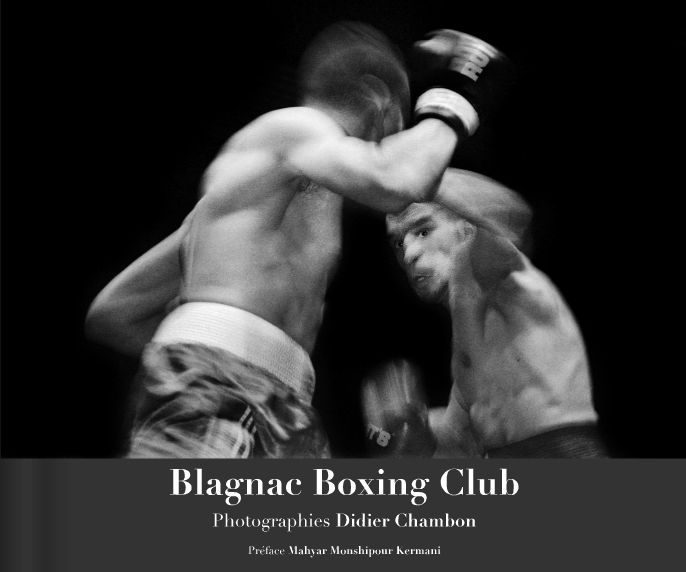 Publication of the book "Blagnac Boxing Club" (Deluxe Edition). This club has seen many great boxers make their debut. Its training room is a mythical place, where hard effort is the rule, accompanied by the ambition to be always better until reaching (and staying!) At the highest level. This relentless drive has led some to the pinnacle of this sport.

These photographs were made in B.B.C. (Blagnac Boxing Club) near Toulouse.

I attended training, where I realized my first images, then the fighting. I am familiar with this discipline until then, for me, unknown. This series is the result of a discovery that enthused me, marked by special moments of complicity and emotion.

This club has seen many great boxers make their debut. Its training room, is a mythical place, where the hard effort is the rule, with the ambition to be always better until reaching (and staying!) At the highest level. This relentless drive has led some to the pinnacle of this sport.

A bit of history ... about boxing:

What is known as boxing was originally a pugilist where all the blows were allowed (clubbing, tearing of the hair, bites, etc ...).

In the 18th century, James Figg, one of those "boxers" before his time, had some success in these often deadly clashes, giving preference to punches over other forms of attack. This technique was school. But, too dangerous, boxing was banned.

Later, another champion, Jack Broughton, to be able to practice his favorite sport (and also because he was very affected by the death of one of his opponents), decided to enact some rules. He delineated a "square" outside which practitioners were forbidden to beat each other. He introduced the wearing of gloves, and decided that the boxers' purse would depend on the recipes and not on the bets ... But some organizers were keen on these "juicy" bets and boxing then went into hiding ...

At the time, the fighting was still close to the fight, even though catches under the belt were no longer allowed.

Some great champions, including Daniel Mendoza, in the early nineteenth century, highlight some "coups" that will constitute the "boxing style", the "noble art". Boxing follows emigrants to the United States ...

In 1866, a journalist, Graham Chambers, wrote a few rules that make up the bulk of today's English boxing (7.20-meter ring, replay time limited to 3 minutes, separated by breaks, categories weight, "counting" of the opponent on the ground for 10 seconds before he is declared defeated, etc.).

It was at the beginning of the century that boxing made its appearance in France as such (since French boxing had borrowed from 1830 punching techniques). It is a Swiss, Franck Erne, who makes it known after a brilliant career in the United States. She quickly supplants French boxing.

The first champion was Georges Carpentier, who, just 18, became in October 1911, in London, European champion of welterweight.

The images, texts and videos presented on this site are protected by copyright, pursuant to Articles L.112-1 and following of the Code of Intellectual Property. Under no circumstances may you use, copy, reproduce, modify or distort these works or the elements that compose them, including on the Internet, without the prior written permission of the Atelier de la Photographie or the copyright holder. the Atelier de la Photographie or the rights holder reserves the right to pursue any act of infringement of its intellectual property rights, including in the context of a criminal action.